The 11th anniversary of the Academy of a Private Investor

Today is September 15, and today is exactly 11 years since the grand opening of the “Online Academy of a Private Investor”. I remember that online webinar with 150 people. And a year later, in 2012, the Academy had more than 15 000 subscribers and 3 000 clients. The webinar was attended by 500 people.

On October 1, 2014, together with the Academy team, we opened a project to support the venture innovation direction and introduced the world to a unique form of multilevel crowdinvesting business. More subscribers and clients came to the Academy.

By March 2019, we had almost 500 thousand people. Academy courses have been translated into 5 languages.

On March 15, 2019, together with a team of professionals, we launched educational courses on blockchain technologies in the crypto business.

And by the tenth birthday of the company, we already had over 1.5 million registered users.

The “Academy of a Private Investor” has become fundamental in promoting the New Economic Evolution of the World.

I am very grateful to all our users, clients, partners, leaders and top leaders who have supported the “Academy of a Private Investor” all these years.

You know that out of 100% of all companies that open in two years, only 20% remain open, and only 4 out of 100 celebrate their tenth anniversary.

If we talk about the Internet business, then the statistics are even tougher, out of 1000 companies, only two celebrate their ten year anniversary, that is – 0.2%. Our project is one of the few that survived, and not just survived, but is already celebrating its eleventh anniversary.

To this day, there are more than 1.7 million users of API from 150 countries worldwide. Academy courses have been translated into 12 languages.

As you know, my mission was, is and will be to bring education on financial literacy and investing to the world. My big goal is to create a financially and investment-literate society, to help at least 15% ofthe world’s population become wealthy and prosperous people.

I would like to appeal to everyone who cares about the future of their children and their grandchildren.

You see what is happening in the world today. Society is slipping back to the level of the 19th century, and what is happening is also our fault. Due to the fact that lies, excesses, fake propaganda are very active in the Regression system, people in the world remain in a state of some kind of sleep. It’s like a caterpillar that should turn into a beautiful, floating creature, but instead remains in a cocoon and freezes. Our planet hasalready moved into the fourth dimension, and the Regression system returns it to the third, submerging people to low energies.

Unfortunately, I will not be able to complete my mission alone. I know that many of you have amazing results. Even a small result is also a result, not zero. Someone thinks that they do not have a result at all, but this is not so.

Results can be measured by two indicators:

1. This is the financial result for your activity.

2. This is inner personal growth and awareness of who you have become as a person.

Yes, it is possible, if measured by the first indicator, that is, financial, because of all these geopolitical complexities and problems, you do not have the financial indicator that you planned to reach. But if you measure your result by the second indicator, then you should be 10 000% aware that you have grown, you have become a different person, and this is the most important result.

Who you were when you just embarked on this path of development and education, and who are you as a person now. Rate yourself on a scale from 1 to 10, where 1 is the lowest and 10 is the highest.

You can say “In general I wanted to earn money, I wanted a financial result, but I did not plan to grow as a person at all.”

But it is important to understand, dear friends, that the financial result that you wanted to have is equal to a certain level of Personal growth.

And the Academy of a Private Investor was created to help people become not just rich and secure, but to become a financial and investment Personality, which will make one rich and secure. Only in this case, the financial result will come to you very quickly.

Therefore, it is better to celebrate your result now as a result of personal development.

The second decade of the Academy of a Private Investor is coming, and its future depends not so much on me and a small group of leaders and top leaders, but on each of us. Become the person you aspire to be in a short time of 3-5 years. Make the income and assets you aspire to by using the materials and knowledge provided by the Academy. This will be your contribution to the development of API and the growth of NEEW. Help those who need it acquire this knowledge. And we will meet together at the fifteenth anniversary, then at the twentieth anniversary of the Academy and we will honor the new rich and wealthy people.

I thank you all for being clients and partners of the Academy and for supporting our common development.

With the 11th anniversary of our company, with respect, 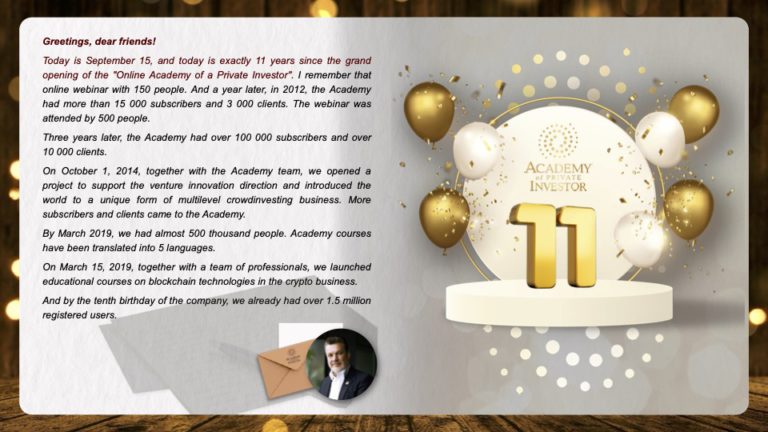 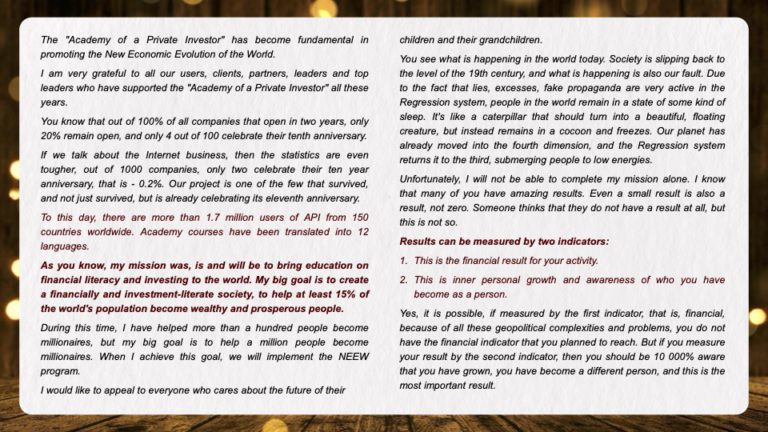 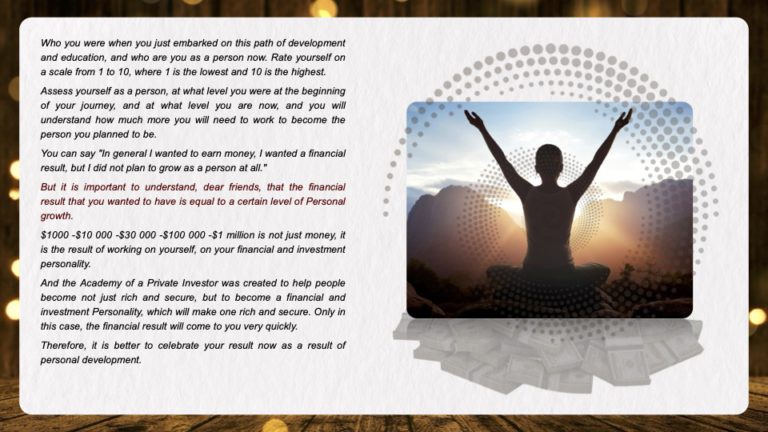 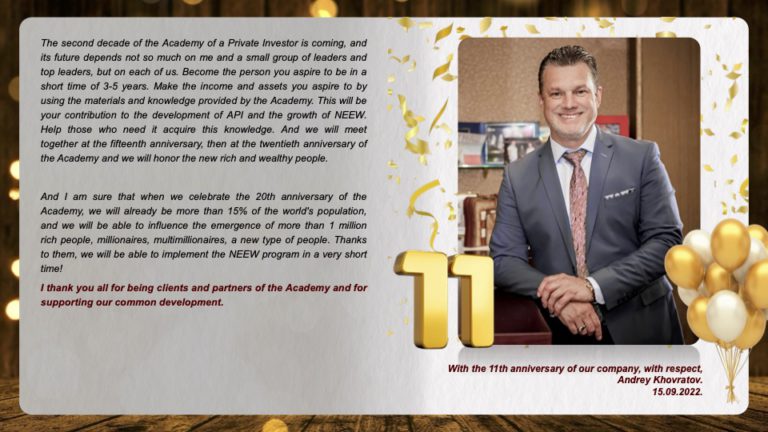 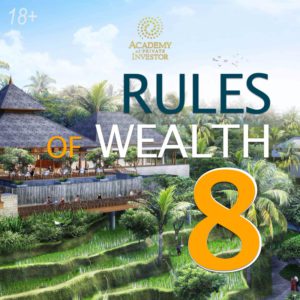 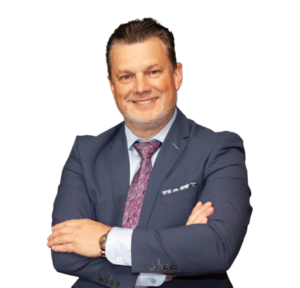